I recently got the DVD with the documentation about Amsterdam I was part of called “Weit Weit Weg“. Here is a little snipped of it, where I am going to the church in the city center to paint.

I thought the whole show was very nice, very centered on the people rather than tourism views. If you notice the word “Rembrandt” somewhere at the end, it’s because they’re saying I’m three times better than him. Trust me!

Now as it gets warmer, I really wish I had more time to paint outside. But I’m concentrating a lot on “Caromble”. Here are two images that I’ve made for the website. I think I’m slowly closing in to the image I have in my head of the whole thing. 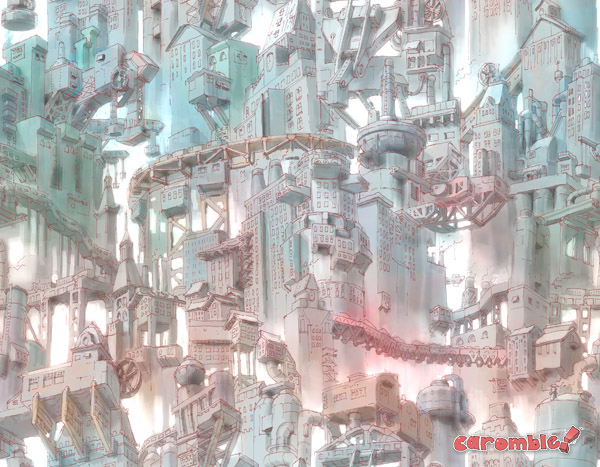 And on another note: there is a inspiring read at the Illustration Art Blog about “Words that Shouldn’t Be Illustrated“. I always tended to think that words are more powerful than images – they are way more precise in telling a specific idea or emotion. Which made me a bit envious of singers and poets. But the examples there make it really clear – images have something else that make them more dangerous in another way. Clearly, saying “he got stabbed” is way less stirring than seeing a graphic illustration of it. Food for thought.