After the first posting about “words that don’t exist” I was talking with friends about it and inspiring questions came up (i.e. in the comments). I want to use this second part to go into these, for example what I mean with “reality”.

Which also make more clear what I am not trying: I do not want to prove that words are always incorrect to describe reality. Although the word “wolf” from the last example is more abstract than we at first are aware of, it is nonetheless a valuable abstraction. Ghosts on the other hand are not an abstraction, but an invention. 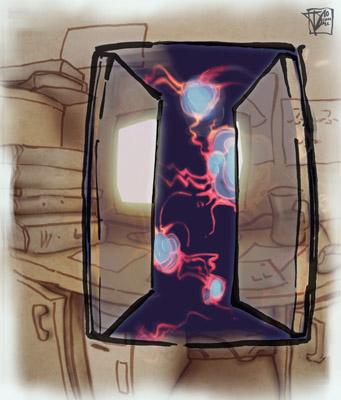 Somehow this is the image that comes to my mind when thinking about these things. Like looking through a window...

What is reality then? The actual physical world of the universe. In this reality there is no meaning. Things just react physically on the object next to them, that is it.
As soon as genes and evolution appeared something changed. Genes and thus life forms seek to survive. Already the earliest forms reacted to the environment in some way – no brain is needed for that. Bacteria might fall into stasis when food supply is low. In other words, they analyzed reality and categorized it according to “survival” or “non survival”.
The first life with a single light receptor might notice a shadow, and react accordingly. Even though this is more complex than what the bacteria did, it is still a gross simplification of reality – a shadow might mean anything.

Things have come a long way – the drive to sense and analyze the reality has created incredibly complex organisms. But the basics are the same: We gather input, then simplify this into a meaning. We could argue whether by now the goals are more complex than a mere struggle for survival. Still: any life has goals.

I think this is the easiest way to explain what reality is, and why analyzing it helps you achieve your goals better. And just as the simple life form might have mistaken a shadow for food although it was an enemy swimming by, so we are still prone to illusions and misunderstandings of reality.

And that’s why I want to write these articles. I want to find concepts we chase, but that don’t exist. And whatever your goal is, this approach will help.

Does this sound obvious to you? Most people believe otherwise: most spiritual and religious teachings tell people that reality doesn’t matter, that there is another world or that our mind influences the world or is the world.

I think it is natural to not see the distinction. Simple animals just react – done. No need to know what is real or not. And I suspect that even for humans this distinction is very new and quite unnatural. In ancient history whatever someone saw or was told of was reality – they did not know how simplified it was. And it is still surprisingly hard to really convince one (I include myself) that what we think about the world is often completely different of how the world is.

The Greeks are the first we know of to notice that. Just take the example of vision – even Plato still thought that rays leave our eyes so that we see objects. Aristotle then believed that the sun is there to allow the air to take the color of objects, which then touches our eyes.
It took us one thousand years to learn that it is light that allows vision. And nearly two thousand years to learn how much of the spectrum we can’t even see with our eyes. The image we have in our head is a fraction of what is really going on. 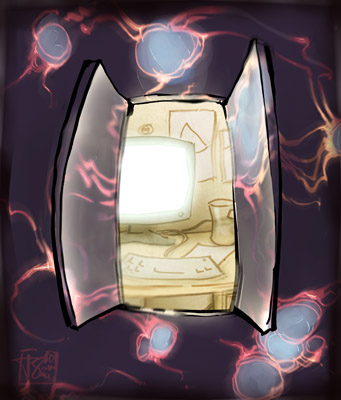 ...or maybe it's the other way around.

Although some people glorify the simple times when we were ignorant to reality: They do not really want to live in stone age times.
To understand better reality will help you with your goals. The fact that you could reach your current age and that you can read this text, is thanks to people researching reality – now called scientists.

Since “words” are also in the topic, I will explain what I think they are. Going back to the basic life forms: they would already try to communicate. With simple chemicals one bacteria might signal the other that the food supply is low. It is thus just transmitting the simplified meaning of its analysis.
A barking dog tells the other that danger is near. And words are just the extension – it is always about transmitting an analysis. They carry on the problems it: It is simplified, and it might be wrong, saying something exists that doesn’t. Additionally they might be unclear (I’m often confused what barking dogs try to say :))

So in conclusion: “Reality” and “Words” are both concepts that do exist. And with this series I want to uncover topics were observing reality is lacking, or where unclear words are used.
Spirituality and the motivational industry being the worst. It is so easy to make random sayings sound true, because no one is researching the words – their meaning is completely fuzzy.
Philosophy has a similar problem. And emotional issues are somehow completely exempt from a careful look at the words we use. I don’t think that’s necessary. If today someone is seriously searching ghosts, we know he wastes his time (going back to the idea of a goal: it is impossible to reach) – yet we still put huge efforts looking for concepts and emotions that might just be an illusion.

And I do not pretend there are no limits – I can only use my brain (which is a simplification tool) and words (which multiply the problem).