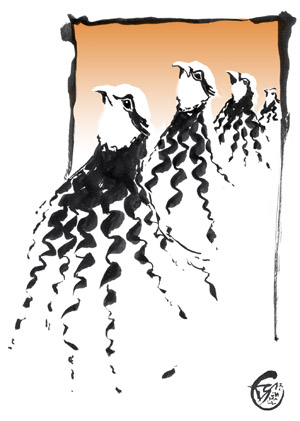 Ornamental patterns are nice to look at. Nature has some stunning examples. But why are we so attracted by it? A recent study about red-legged partridges shows that we’re not the only ones… makes me wonder how we can use the lessons for artworks.

The study is a bit special (1), in that it doesn’t look just at size or color strength but at the form of the pattern. What seems to matter: regularity, contrast, the smoothness of transition from big to small patches and how twisted the pattern is (and as per usual, bigger is better). It’s those traits that the females get all googly eyed.

As I see it, to be a reliable mating signal, this has to have certain features: It must be costly, so that it shows the health of the male. It must be “honest”, so that weak males can’t simply fake the pattern. And there must be a simple rule behind it – else it would be too hard measure for the potential mate.
So: Based on simple rules, yet hard or costly to create… the females are all over that.

Fractals seem to fit those needs – which may explain how ubiquitous fractal patterns are in nature. As I wrote in an older article, some of these come from possibly very very easy algorithms. Which is generally what our genes like (they “prefer”to be short). I’m sure one must be careful here not to jump to conclusions about fractal influence on beauty. As noted in the study, sometimes just more complex patterns might show the health of the bird. But even then, it could give artists hints – about what kind of complexity is considered beautiful.

To say that humans would share this same taste as birds seems far fetched (we’re not looking for bird-mates after all). But there might be overarching rules for beauty. But there are studies the other way around, that might hint at something. For example a study by Stefano Ghirlanda et al. (2) shows that chickens have a similar taste for beauty in human faces. After being trained to always pick female faces, the chicken starts to prefer certain female faces over others…. stunningly the same that humans like most. 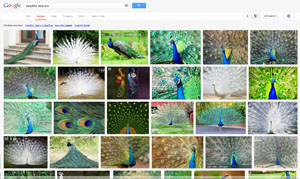 Searching for “beautiful peacock” proves: even the google bot got seduced!

This seems to hint that we don’t have special genes telling us which faces to prefer – so that we get perfect offspring. But rather we rely on some basic mechanism that is present in all higher animals.
So if animals react as we do to human looks, then it’s not surprising humans react the same to bird looks? … and if you think about it: have you ever seen a photo of a female peacock?