Yesterday night I came from a concert with Konrad and Robert. When I looked down I noticed that I got shoes on. Which was weird to me, because I distinctively remembered how I was only in socks when I got in.
As I thought about it, I noticed more odd things – Jay Leno was the security guard back then, but his face didn’t look like him anymore.
I said: “Maybe this is a dream.”… It felt a bit offensive to tell my companions that they are not real but my imagination. They just shrugged. And as I looked at the surrounding I was sure the idea was ridiculous. Surely a dream would not feel so real. It didn’t matter that we just walked though the backyard of a video-games store which featured as promotion for a racing game an original sized replica of the great canyons (pretty nice I must say).
I woke up shortly after that. 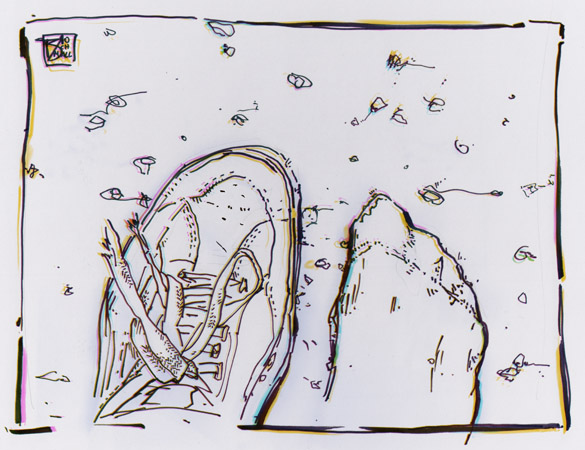 I told the story to a friend. As we were walking through a supermarket I told her how odd it was that a dream can feel so immersive and like such a rich experience.
For a moment there I was just checking if this is maybe a dream again – but it was just impossible. This felt real – this must be. Surely a dream is more blurry – simpler, more like a movie.
Mind you, I was walking around in underpants, since I lost my clothes (long story). But it didn’t matter much – odd things happen all the time, right?

I had this a third time last night. And each time my logical brain picked up the right hints and made the conclusion to the point: These things usually just happen in dreams. But it was unable to convince me – my experiencing self was convinced this had to be the real world.

This is the first night I have this so specifically. But I’m working on it since a while. Every now and then I try to consider if I’m just dreaming. Hoping that when I get used to it, I might do it sometimes in my dreams. As it turns out – it is tough to check. How do I know? I can tell from this night that you can’t just feel it. It doesn’t lack “realness”.
The telltale signs could have been the logical inconsistencies – but I wonder how much we have of those all day. I think we’re surrounded by them. Things we don’t understand – or don’t pay attention to. Misjudgments. Unhappy accidents. Weird conversations.

I will continue the research. So far though: I can’t tell if I’m dreaming right now.