Some postcards with patterns I had left from a Venice trip. It’s from the floor of the Saint Mark’s Basilica in the famous Piazza San Marco.
The building itself is from the year 930 (with lots of reconstructions since), but much of the floors date from the 14th century. 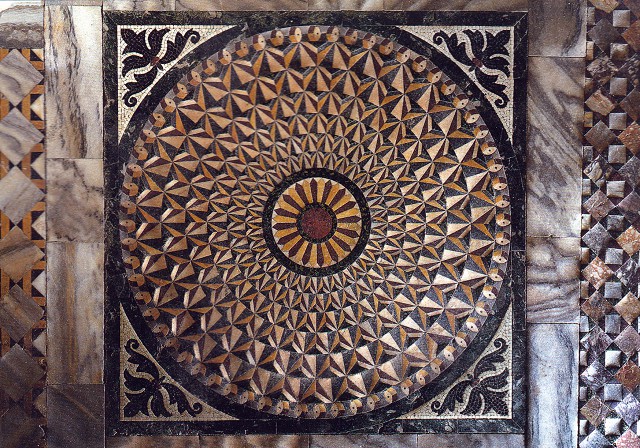 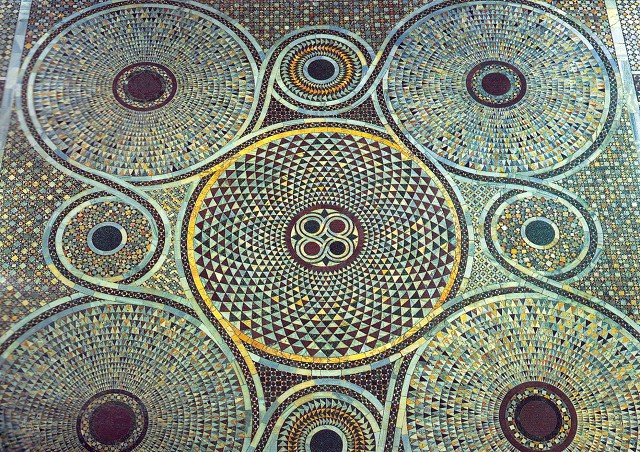 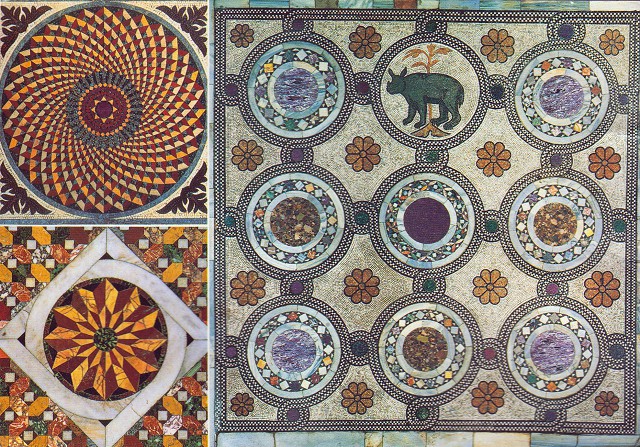 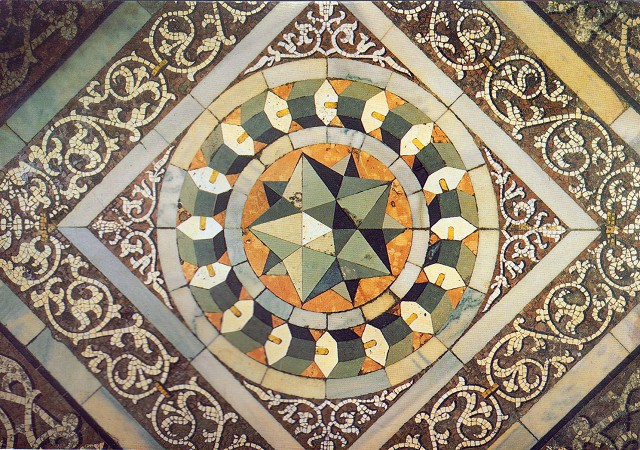 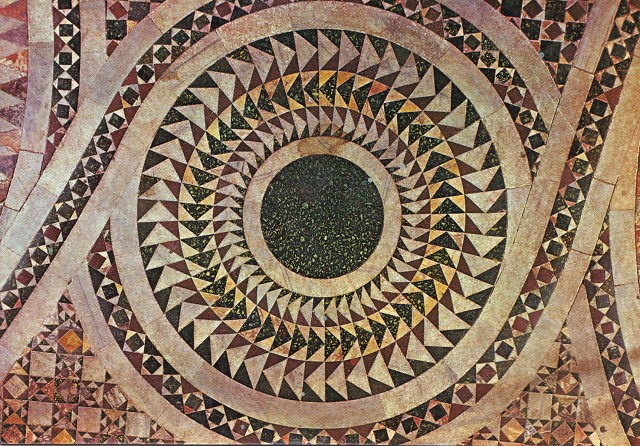 I had some discussions about the theory of David Hockney that I wrote about in two recent posts – and it gives me the impression many people have a misconception about what makes realistic painting so tough. Not just people that are not painting, but even experienced artists fall for them.

They think that Hockney’s idea of primitive cameras can be dismissed, because other reasons explain the great development in realistic representation in art. For example it is said that the equipment got better over time. While true, that does affect some quality – but not representation of things like perspective and facial expressions. 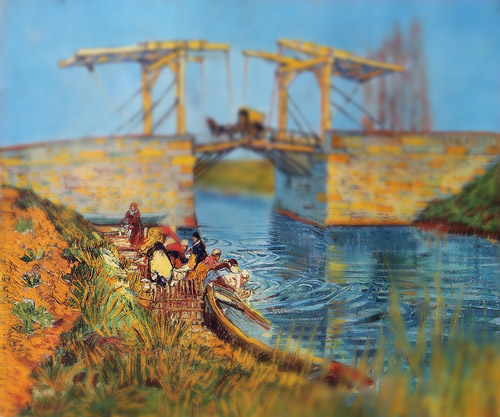 Van Gogh - 'Pont de Langlois' (1888) - tiltshift
A stunning example of how effects we learned from cameras can enhance art. (Redone from this awesome idea.) 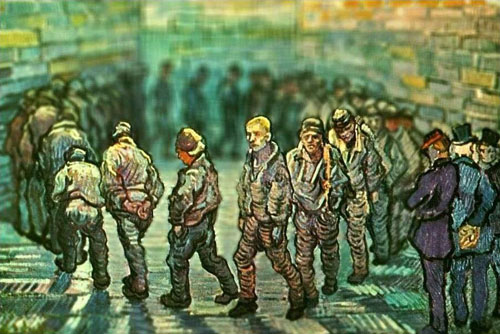 The most common idea is the romantic view of the natural talented artist. Just some guy born with an extreme talent, that can just do things like no one before. I think this has something like magic – which makes it a likable idea.
What this ignores though is the hard work it takes to paint realistic – not only moving the brush, but seeing the world in this different way needed. If it was just to a simple inborn talent, then surely in the thousands of years before modern times someone would have managed to do what we do today.

Just take colors as an example: Every beginner thinks shadows are gray. It takes years of learning and teaching to start seeing the real colors. Shadows have all kinds of shades from refracted light – like blue when it’s in the outside. Refracted light is a perfect example: It is surprising to many people – the first time I learned about it it was like a revelation. But it turns out – its everywhere, and enhances pictures massively. …So why did I not notice it on my own?

This can be extended to so many effects that I think we only know because the camera taught us. Just think about facial expressions: How could painters possibly have missed them? Yet all the way until the end of medieval times, faces looked dull and emotionless. 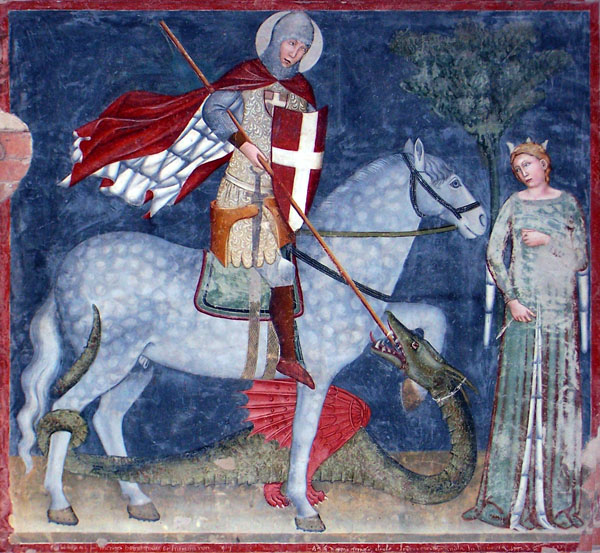 Saint Jordi fresco in San Zeno (13th century)
I have no hard evidence, but somehow I just don't buy that artists before the 15th century aimed to portray emotional detachment in all their art.

And I think it’s only Hockney’s idea that convincingly explains the sudden change in the 15th century.
Does that take away a bit of the skills we thought the masters like Caravaggio, Velasquez and Hals had? Yes actually, for me it does. It brings them down to a level I can relate to again: Hard working artists, that just used every trick in the book. No magic… well just a little bit maybe.

Another argument that comes often is that artists today would not need to use photos or cameras. I think that’s completely false: Not only do even the most skilled painters of our time heavily rely on photo reference or projections (just read James Gurney for example). But additionally you can’t ignore all the things we learned simply by studying photos.

But I want to give the question a 180 degree twist: Why do we think right now, that our eyes see like a camera? We just accept the camera image, and assume that an artist just has to get as close as possible to that, to make something realistic.

The difference should give us pause: If we were before the camera not able to notice that we see the world that way, then why are we now so sure that this is how it works? It might as well work a completely different way – that we are still not able to become aware of and put on canvas.

I think the cubists had the right idea – but didn’t quite succeed. But if all I assumed before is true, then we can expect it to be tough. It took hundreds of years, and cameras to make us aware of some things we didn’t see before – it might need another technology to help us again.
But most of all it is a battle in our minds: It’s time to break free from the camera – try to see with our own eyes and brain again. 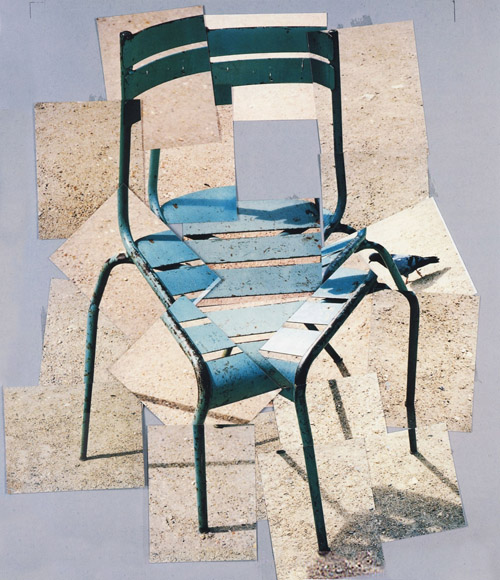 David Hockney - 'Chair' (1985) - photo collage
Although this picture is incorrect in so may aspects, it does look surprisingly right. I think David Hockney (inspired by Cubists I guess) is onto something here. 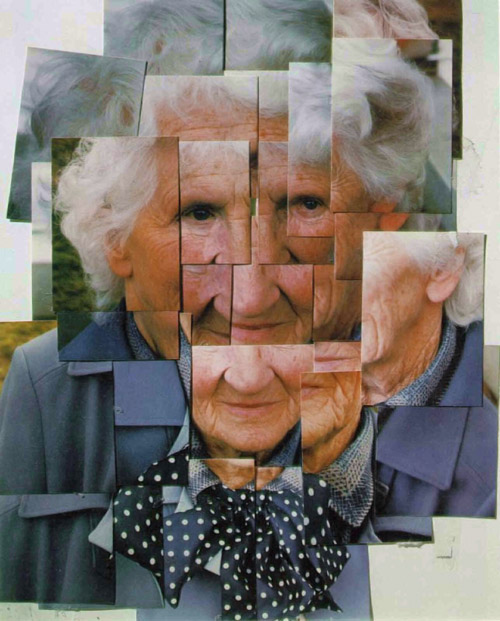