In one of my latest posts I tried to make a list of things no artist painted before we had help of optical devices, based on David Hockney’s findings. I want to extend the list – and find explanations of what is going on.

When I was at the current exhibition of Txell’s awesomely funny furniture (heh, good pretense to link it), I found in her bookshelf design a book about Japanese art history. And it struck me how similar it was to the medieval European art. All items from the list of pre-optics art perfectly apply: Perspective errors and size issues, focus, missing reflections and fabric patterns that don’t wrap around shapes. 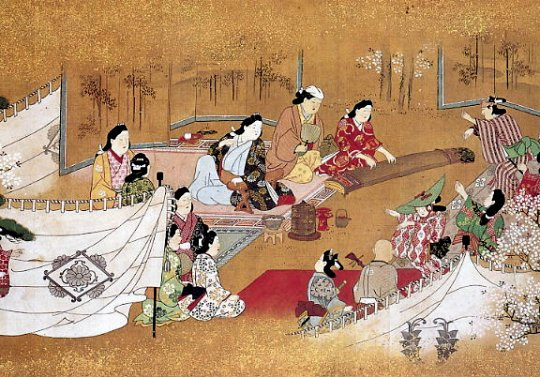 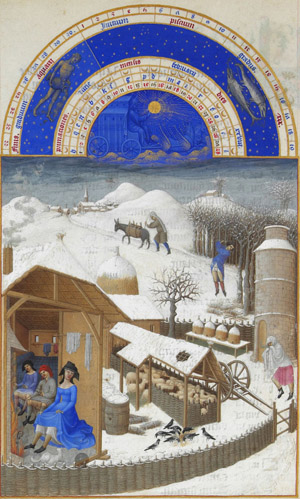 Limbourg Brothers – ‘Les Très Riches Heures du Duc de Berry – February’ (ca. 1410)
This painting by the Limbourg brothers shows no shadows – although it is set in bright day.
Their ‘June’ painting would make my point much better, but then you wouldn’t have those hilarious looking people warming their genitals at the fire.

Also two items I had not in the list yet:

Japanese artists were not influenced by the European tradition back then, so they didn’t do it to conform or just because they were used to it (I’ll have to verify though if I’m 100% correct with this). We see the same in Indian, Chinese and Arabian art. It seems like that it was just the intuitive thing to do.

Now it looks very odd to us. We are used to see photos and movies – we think that’s how the world looks like. How could they have NOT seen sunlight? But really – I cannot find any medieval painting from Japan or from Europe that shows it. No shadow to be found. If you know any exception – please let me know.

I argue: They just did not see it. Only the camera taught us. And for sunlight there is an explanation: We are not able to see the strong contrast that sunlight creates. Our eyes don’t work like a camera – they don’t have one setting for light sensitivity. But rather each cell does compare its value to the value of the next cell. So what we see is contrast rather than brightness.

A good proof is that when you go outside of your room, you don’t notice much of a brightness change. But actually – it might be ten thousand times brighter in the sunlight than in a normal lit room.

Here is a video by Eric Mazur, where he explains the luminance problem (If you read my older posts, you might remember him on another topic). The full lecture is a bit of a different topic, but if you’re interested in optics and how humans react it, it’s worth watching.

Edit Note: YouTube took the video down. But you can find the lecture here. Go to the 8 minute mark.

So it is clear that we cannot see absolute brightness of an object – we need a camera to help. And it is one of the hardest parts in painting to get it on the canvas, since the canvas is no light source, you only have a tiny part of the spectrum to try to convey a real life scene. The optics back then already did a big part of the job: by painting from the reflection off a wall, you already have a “cropped” value spectrum.
By now we artists learned this – and the how and why of it. So we don’t always need photos or projects. But I am sure that they have been necessary to figure out the principles behind it.

More tricky is the question about the missing shadows. I am not sure why artists ignored them, but I think the video above has some hints when talking about optical illusions. As this is getting long again, I’ll leave it to a next installment. Trying to at least bring up guesses what could be going on – why it’s interesting for artists today. If you have any opinions or ideas about, I would be interested to hear them.