Happy 2014 everyone! Lazy as I am I used too much of my holiday time for surfing the web. Here are some links I found, that should be interesting for you creative types.

For example a recent study that asked 7000 people where in the body they experience certain emotions (safety copy). The results were quite consistent across cultures.
It also maps nicely to common sayings I think. And besides just making for a cool image, it’s a good hint on what to exaggerate when portraying such emotions in paintings. 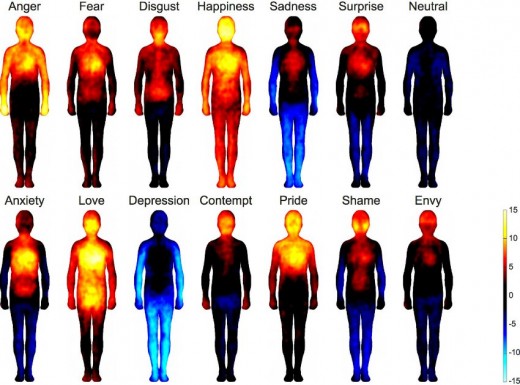 Check your skill of figuring out whats toddler art or abstract art.

– Did you know the CIA subsidized modern art?
– …or what color the sky had in ancient Greece?

Bronze! There was no word for blue in the ancient Greek language. The nearest words to blue – glaukos and kyanos are more like expressions of relative light intensity than descriptions of color. So when the Greek referred to the sky as ‘bronze’, they meant that it was dazzlingly bright, like the sheen of a bronze shield, rather than actually bronze-colored. It seems the ancient Greeks described things based on other qualities, so when a word is used that, to us, seems to indicate ‘yellow’ or ‘light green’ really just means fluid, living and fresh, and was therefore used to describe flowers, blood, the sea and sheep. It would appear to us that the Greeks were referring to all of these things as yellow colored, but that’s because of the way we describe things. Interestingly, in Russia, there are two words for blue: goluboi and sinii, one word referring to light blue, the other dark, which to Russians are two different, distinct colors, not shades of the same color, much like other cultures perceive pink to be a shade of red, rather than a color in it’s own right.
(Originally from the “The Book of General Ignorance“)

Which reminds me of the Himba Tribe that sees different colors than Westerners do.