After posting the Soul Lessons of my exhibition it is time write about the practical experiences of it. This was my first showing, so I still don’t know anything really Nonetheless some things I learned might help other starters. And if anyone has other insights: I am interested to learn about it.

First a little video – thanks to Ramon for doing this.

One lesson I learned: It is a huuuge amount of work. Way more than estimated.
The gallery in my case did not do much promotion, but was very cheap. A great opportunity. As I wanted to keep the costs low, I did most of it myself or with the help of friends.
That worked out well – although I’m not calculating our working hours into the costs.

For frames I went to antique markets and shops – it is much cheaper and looks often better than professional frames. But one understands the prices as framing was one big time thief. If you do it yourself count half an hour per image minimum. Also allow space by making frames bigger than the images if possible. It does help a lot.

As promotion I’ve spread 1200 flyers throughout Amsterdam. Even though they looked professional and I was quite lucky with the motive: As far as I can see, the turnaround was minimal. The effort of designing, printing and spreading did not pay off.
Not sure if I would ignore flyers altogether next time. And the amount of 1200 is kind of the minimum you get at print shops anyways. But I would at least put less effort in spreading them (very time consuming). Rather throw more away and only target very specifically. 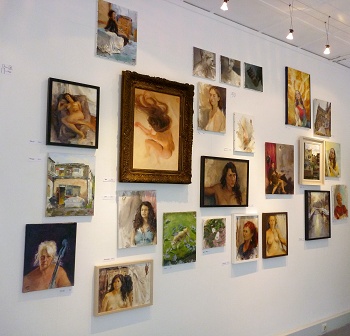 Furthermore I ran an Google adwords campaign. It was quicker to do and better for targeting. Now I’m sure I did amateur mistakes – but I seemed to reach artists in Amsterdam quite specifically. Again: No major turnaround as far as I can see. But given the low amount of work I would do this again.

The press work is where I failed quite badly. I think there must be hundreds of magazines/newspapers/brochures/websites here in Amsterdam about art or events. The gallery wrote three newspapers – and I should have been much more and earlier behind that. An opportunity missed. Next time!

Seeing that advertisement and flyers didn’t help much, I have to somehow learn attract the specific clientèle I need for selling. And I need too learn how to give everyone enough attention – it was a shame that many great people came and I did not have the time to talk to them enough. I was easily distracted and had to jump from one place to another. It was nice to see who joined for the opening. And it was also interesting to see who didn’t come – especially from all the galleries I went to. I’ve made a list of “definite” guests and “maybes”. And it turned out to be very precise. All of the “definites” turned up. And nearly no “maybes”.

I did show an overview about all my styles. With oils, sketches, watercolor, digital art… of all kinds of subjects. Next time I will specify a topic. This will allow much better targeting. And I think if I have special topics, then groups with specific interests are easier to attract. 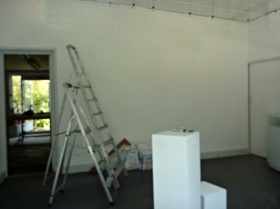 Everything comes to an end.

Other opinions or experiences would be interesting. And of course: The first exhibition is a bit special.

Summing it up, my suspicion is: This is a long term project. Actually I should have known, everyone told me. But sometimes I have to experience things to understand. For example I couldn’t talk to the guests a lot but they talked among each other. The whole thing is like a node in a network – you become part of it, and you connect others. But it will take time to become fruitful.
The “maybes” will become “definites” over time. And more people that like my art will return. Some other galleries already took attention and it might have even convinced a German TV show to film me in August for a travel show.

How to specifically get collectors and buyers is what I still have to figure out. But learning all these practical lessons will make it easier for the next time… I hope. So let’s see where it all will lead.

And as requested by the guests – here is the:

Recipe for the “Pancakes ala Maga” 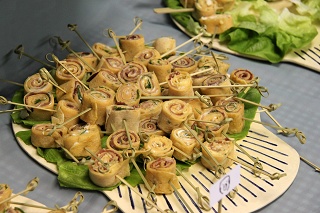 For the topping:
classic fresh cheese
smoked ham
Some green salad for decoration.

1. Mix the flour, eggs and salt in a bowl for the dough. Whisk well and then gradually add the milk and mineral water. Add the Italian herbs and chili garlic oil – which adds the spicing and colors.

2. Put oil in a pan and heat it up. Add a thin layer of the dough, to make the pancake.

3. After it is done from both sides take it out and add a layer of the fresh cheese. Add the smoked ham on top.
Then roll the pancake up, and cut it into nice pieces. You can put it on the green salad to make it look nice.