Some might know Kevin Kelly from his Ted Talks about the evolution of technology. But that’s of course just the tip of the ice-berg. What an amazing mind (I love people that shine in so many fields) and what an awe inspiring blog.

One of his latest posting about Extropy is easy to understand and yet goes very much in depth. Maybe only work-less bums like me have the time to read it :D but it’s worth it, I promise. Great piece. His concepts are related to Steven Wolfram’s “A New Kind of Science“. An interesting new idea is for example that old technology stays around because it’s still needed. The whole concept is spot on – I think it goes further than he writes (ok, the posting is long enough either ways ;)). I think it may also support Chomsky’s idea that language might not have evolved genetically.

The self organizing patterns he talks about can be seen in nature often – that’s why maybe art might help with this new way of looking at the world (wouldn’t that be cool). Here one of my older sketches of seashells, where you can see some cellular automaton-like structures. 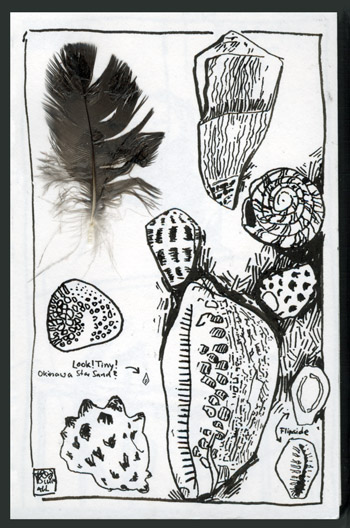