Synesthesia is the mixing of senses – smelling music, seeing sounds as shapes, or perceiving colors as numbers. I’m doing some self-experimentation with it. No universe shattering surprises… just yet. But it’s a fun exercise.

This odd brain function not as uncommon as once thought: one in twenty persons might have synesthesia in one form or another. Artists are more prone to it. And probably it is just an overly strong occurrence of something we all use: abstraction, analogies and association. Everyone understands what is meant with “fuzzy feelings” or “having a blue day”.

Or how about those nice taste visualizations in Ratatouille?

I also found this short-movie interesting, that tries to visualize what synesthetes see. On the related blog they have more examples.

Another nice page is Carrie Firmans Synesthetic Library with little flash animations showing the shapes she sees for certain sounds. These are not completely random – a noise looks very similar to a TV static and the trumpet is literally a little yellow trumpet shape popping up. For me too a trumpet sound is at least yellow – just like the object usually. Which also fits to newer theories that synesthesia is mostly learned from real world child experiences.

There are some photos on Daniel Tammet’s blog, of how he sees numbers. He holds the European record for reciting PI, and describes the calculation more as flying over a landscape of numbers, shapes and colors. He also describes in his latest book, that he does not think he is unique – we all have these abilities, just have to learn to use it.

I guess the border to what is called real Synesthesia is gradual. I do not have unique colors for 10.000 numbers as Tammet does – but for low numbers I can tell very specifically which color they have. When scanning the old sketchbooks I came across one picture where I used numbers to color an image. So I filled it now on the PC with the corresponding hues. 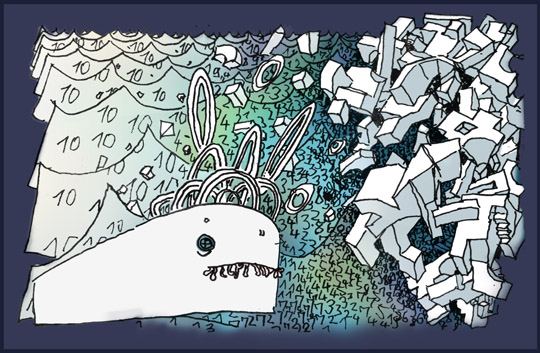 The thing falls quite a bit of the image I have in my head, because the numbers I see are also describing the luminance. Number 10 is yellow – but bright like a light source. And since paper doesn’t glow, I can’t really put it in there. The 0 is more blueish and cold, but just as bright – a 3 on the other hand is a proper blue you can buy in paint tubes.

I was looking if there are some systems in the relations. But it does not go really nice around a color circle (which I guess would make the thing more practical). Here I tried to map the numbers on a color chart. 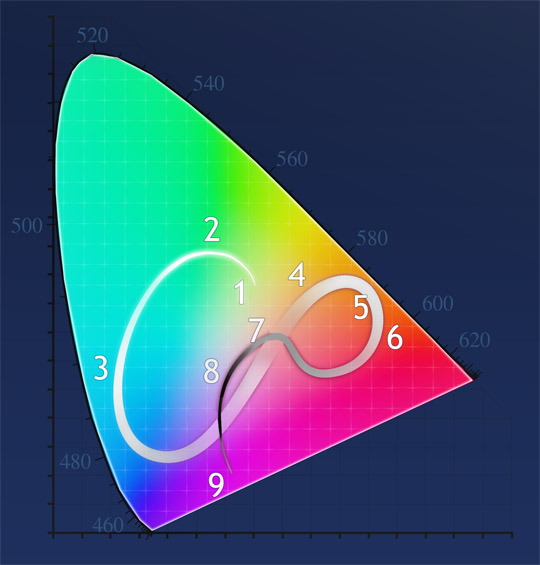 The numbers mapped on a CIE color chart. The line brightness shows the luminance.

There are also some areas underrepresented. Number 6 is a strong cadmium red, but dark warm reds are missing. Maybe connected: When painting I do have trouble with dark reds. It is hard for me to observe exactly what color is what. Orange is a much more comfy area – with 5 being orange. 4 and 6 are close-by. Maybe that’s why this web-page ended up orange, as do many of my pictures.
And when going above twenty, or into fractions, it doesn’t follow mathematical rules. While 15 is still a glowy orange (10 and 5), for 25 it is simply: green and orange. Just as 2.5 … so while the numbers do help me to remember colors from real world scenes, there will be no awesome endless PI calculations for me.