This was supposed to be the cover for a game, that sadly got cancelled before release. It’s from a while ago (I’ve posted somefantasy characters for it earlier) and now that I had more freedom on the format, I gave it a final touch-up. 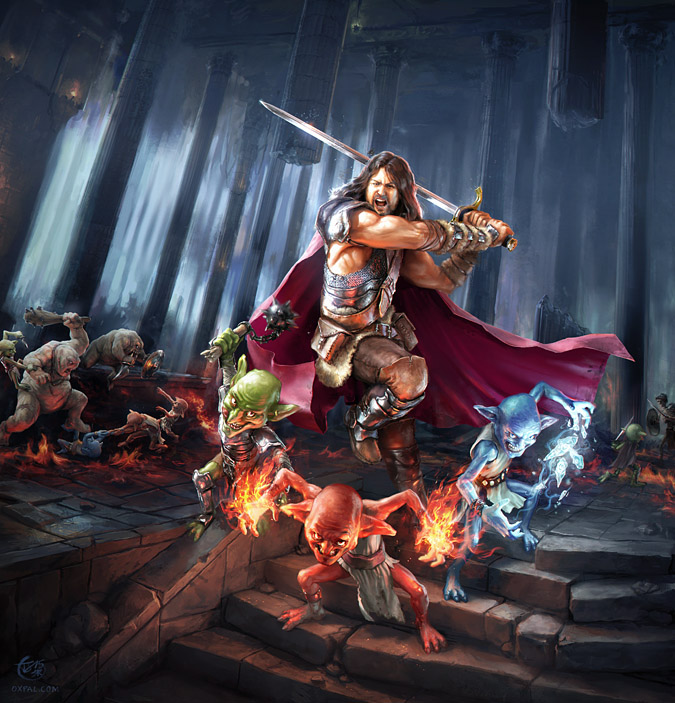 Since it was the central art piece for the marketing, this went to a thorough process. With a good briefing, and enough time to go though the proper steps. So I’ll post them here as a sort of tutorial.

The central theme of a hero surrounded by fellow goblins, makes it easy to start. I just made a lot of sketches to get familiar with the characters, get into the flow and find ideas for layouts. This is all very loose and playful, which will fit the mood the artwork should bring across. 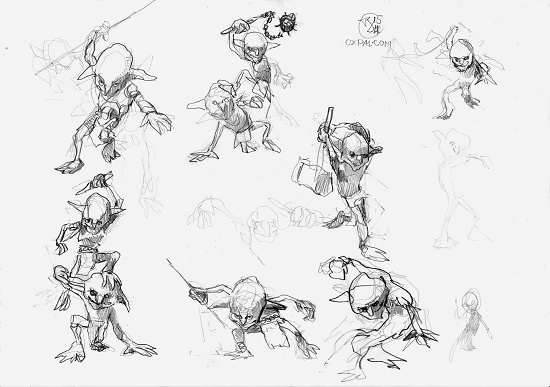 …and even more. Doing this in pencil instead of digitally makes sure that I can’t do too much detailing and redoing. This keeps the process quick.

Some hero sketches – different poses that communicate action and that he is in control.

I can then also just use the drafts to put together a layout sketch for the whole artwork. The faster these steps go, the more time is there to try around and find more ideas. In a way this is the most important step – even with many changes, the core of it will stay intact and guide all other decisions for the details.

These are three layout designs – of which the last one was chosen by the client.

Using the sketch I provided two possible color versions to choose from.

After the first option was chosen, it gets serious! It’s good to have an accurate base from now on, so that there are no big reworks necessary later. I used a 3D application to make a simple blockout of the room, so that the perspective is believable. 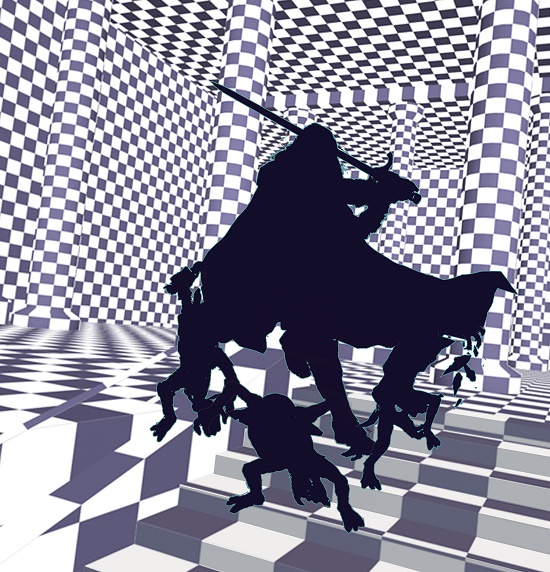 The 3D layout with a perspective grid, so that painting along it becomes easy.

Again I’ve picked up the pencils. This time to draw design all necessary details for the main character. 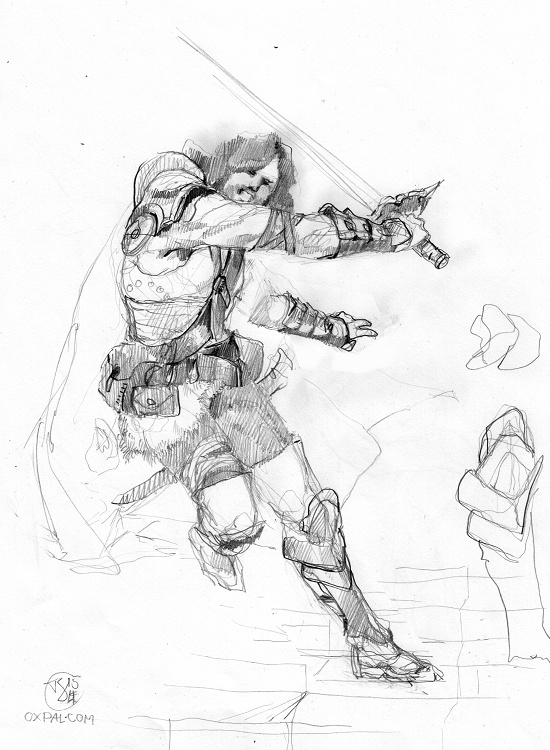 One should not get too stuck to it (I changed the arms, head and legs later), but if the elements work in the drawing, it’s a good bet they’ll work with color too.

This is already quite close to the result.

I went with the same process for the background characters: lots of sketches with different poses and perspectives to chose from. 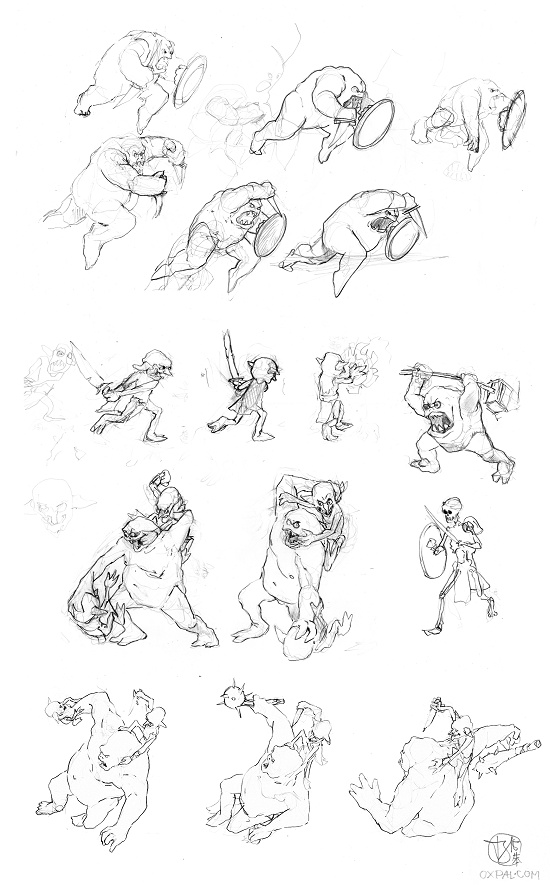 Sketches for the “Meatblobs” that attack in the background.

Putting it all together.

All elements are included here. The final use should always be kept in mind – so that there is room for elements like logos or screenshots. And ideally keep room on the edges, in case any unforeseen usage comes up.

The rest is the grinding: It doesn’t change much per hour of work, but it’s necessary for a convincing look. The more important and bigger the marketing use will be, the more time can go into the details. It’s open ended in a way – so it’s a good idea to keep the final resolution in mind not to overshoot. 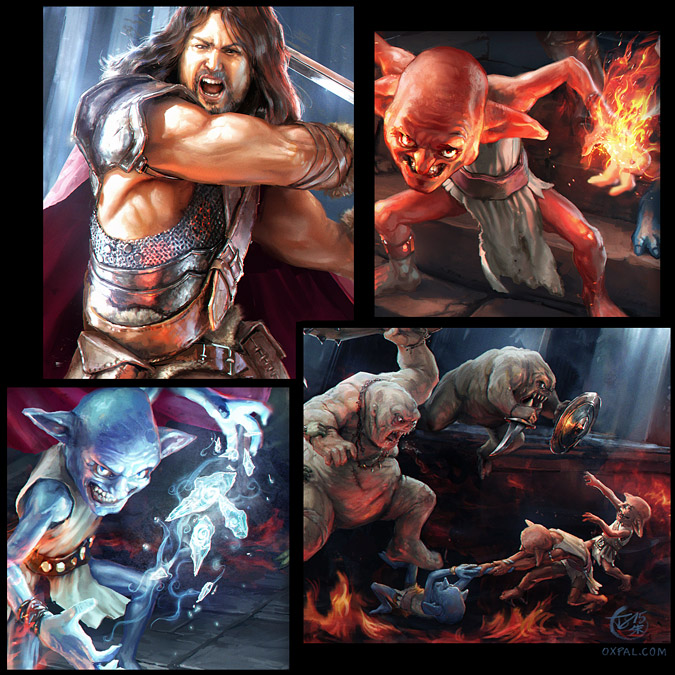 Close-ups of some details.

One last thing are the after-Effects. I’ve made a gif below, naming each step I did in the effects pass. I exaggerated some, so hopefully they show in the animation. Of course the step wont save a bad artwork, but you can squeeze quite a bit out of it. After correcting colors and adding little glows and sparks I also added some noise for example. Usually not a fan of it… it’s really over-used in illustrations at the moment. But it adds a slight movie-like flair to it.

This animation is showing the steps of the “post processing”. Some are effects subtle, so the bigger version behind the click will show them better.

As the game didn’t come out, there was no need for adding text anymore. That allowed me to tighten the composition, so it works well on it’s own. For example I shortened the stairs compared to early versions, and broke them up so that the sharp lines are gone. Now they are tilted so that they are leading they eye more around the heroes. And I think it hints a bit at their power that the stones are crumbling beneath their feet.
To save you the scrolling, I’ll put the final result here again. Hope you like it.