My travel to Dresden was short, but enough to fill two postings (here’s part one).
And I also want to tell some of my new plans for the coming months. The first thing: Get better quality reproductions of my paintings. If anyone knows a good place for scanning – please let me know. I searched all I can – but to no avail. Right now at least I got better pictures than with my normal cam. The plan is to sell high quality prints of all my upcoming works. Of which I’ve got a bunch standing around. I for example was painting more in the city now – and I want to make a proper series out of it. 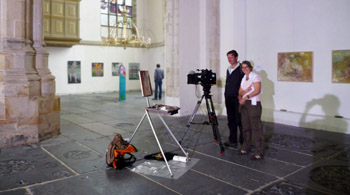 Film crew in the Oudekerk

Also, I’m working on a little game with a team of programmers from Utrecht. The announcement of “Caromble” is coming up – be scared :)

Oh yeah, and a German TV crew from travel and culture show was here. Filming me for one day – at home and going through Amsterdam. Here’s a shot of them filming me in the church where I was painting. Later we went to a squat in Distelweg where the “Art for Art’s sake” event was. I’m so curious how it turned out – will take until next year though until it is shown. I hope it is a bit promotion for me too. 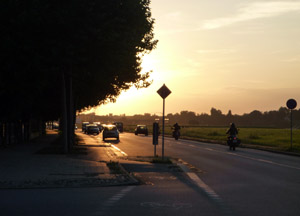 Sundown in Dresden, close to the river Elbe

Hm, how do I get the turn back to my adventures in Dresden? Maybe something I noticed when painting here in Amsterdam and in Dresden: The light is actually quite different. I don’t know why, but some colors like the ones in the photo I’ve never seen in the Netherlands. The sun seems much more yellow in Holland, and on sundowns it doesn’t fill the landscape as in Dresden. Would be curious to find out why… I tried to take the photo on a normal street as it could be anywhere really.

This warm filling light – maybe I imagine it, but it is very typical for the Dresden-views by Caspar David Friedrich. 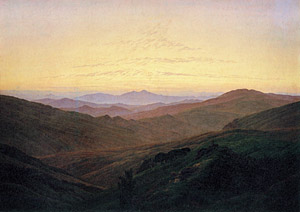 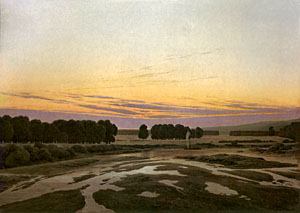 Another exhibit I was at in Dresden was “What is Beautiful?” in the Hygiene Museum. It’s exploring beauty means in our culture and the roots of it in our brain.
Great for any artist of course – I especially liked the scientific part.
Did you know for example that all humans share the same preference for landscapes? Among all people Savannahs – warm open areas with some trees and bushes, landmarks and accessible water – are the most popular. And it doesn’t even matter where you live – it holds true even children born in forests high up north. That surprised me really. It is amazing though, it is like doing archeology in the brain – digging out what our ancestors saw and thus formed their preferences towards.
And it explains why the Dresdeners love the river-meadows on the Elbe so much. 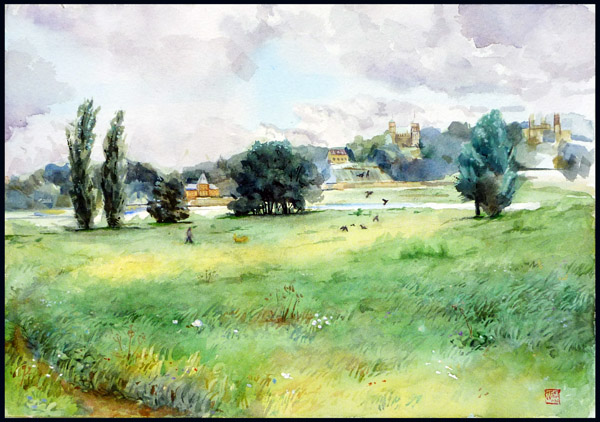 The 'Elbauen' - the Savannah of Dresden - Watercolor 18x26 cm

This research is good to know for artists of course. There was much more at the exhibit and there is even a group in Berlin called Association of Neuroesthetics which wants to create an exchange between artists and neurologists. Maybe I’ll write them – sounds interesting.