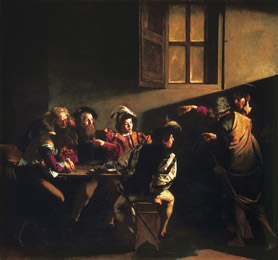 It’s nice to see old paintings and pictures of art history and be amazed at what they painted. But often I’m baffled about what people did not paint. Sunlight is one example.

Did they not see it? 1400 is the time where many things changed in art. Caravaggio is most famous for introducing dramatic lights and shadows. And for the first time painters managed to draw things in perspective.

David Hockney’s made some startling discoveries about this topic – he suggests that mirrors and lenses came up during that time, enabling artists to paint things like never before.

When I wrote about his book recently, Fufu pointed out that there is a documentary by him on youtube (thanks):

So he suggests there are visual features of our world, that art only managed to portray with the some kind of camera or optical help. I tried to note down a list of these: 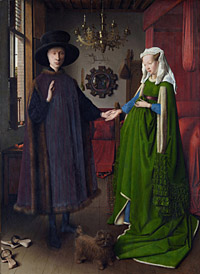 While find his findings convincing – I don’t agree with all conclusions. Let’s take the perspective: He explains that the chandelier in Van Eyck’s painting cannot be painted with two eyes – because you have two perspectives of your two eyes. The same goes for reflections on it.

Does that mean no one ever in history thought of closing one eye? Are one eyed people the best painters? Not very convincing. And is it impossible to paint because of the little difference in viewpoint?
Rather I would say it’s the brain that screws us up. We’re just not like a camera – and we cannot just be aware of the image landing on our retina. We know from science about vision that in our mind we rotate things. We tend to see things straight on and up-right in our mind.

Artists are today able to do it from their head. But keep in mind: No one does it “just like that”. It takes years of education. Much of it is spend on hammering out the things you would do intuitively. And much of the knowledge we use is based on what we see from cameras. Gosh, huuuge topic. I’ll go into more details in the next days. 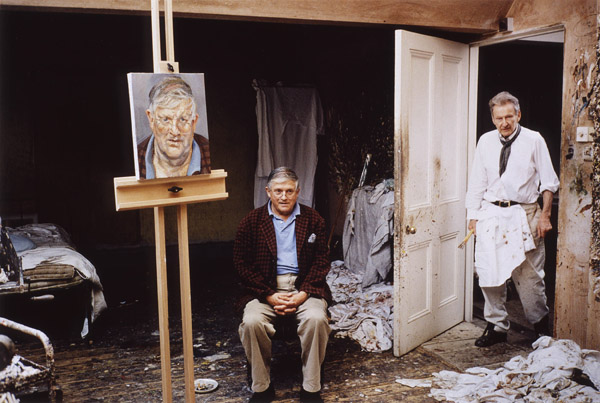 I planned to put here David Hockney's own artwork called 'Chair' - but when looking I found this - of him in Lucian Freud's Studio. So screw it, this is too awesome to not show. Painters are badass!