The term neural plasticity describes the fact that our brain is highly flexible to adapt. Everything we learn changes the our structure of neurons physically. I think the way how this works relates to the question whether you should paint digitally or with traditional media.

Here is a TED-Talk by Michael Merzenich, outlining some of the new discoveries:

That was the short version – and there are some obvious things to notice relate to art. For one: You can still progress when you get older (Phew! I can put the rope away.)*. But the thing I wanna draw attention to here is the role of sensory input: It is absolutely essential. Already a baby does not get taught word meanings by its parents from the start – but rather collects all sensory inputs and reconfigures the brain, so that it can later distinguish what’s important and what not. If all you hear is noise as baby, you won’t be able to understand language – because you wouldn’t know what to listen to.

Here is a longer version where Merzenich speaks it out more directly:

He notes there layers abstractions. We rely on them more and more in old age, and pay less attention direct sensory input. Thus our brain loses the ability to distinguish it – and falls into decline.
It must not be that way: Smell an actual flower – he suggests. Go for walks! Enjoy little things. Don’t live too much in your head! (There I had to twinge a little myself).

Digital art is exactly removing that: The real physical contact with the medium. It’s a heavy layer of abstraction. You usually don’t even have your hand on the art – you move your mouse or tablet-pen somewhere, and see the result on the screen. No friction, no smell, no touch. You also limit your movements – only your fingertips do the job – no arm waving, no smudging with the palm, no scratching, rubbing, licking (just theoretically, I swear). 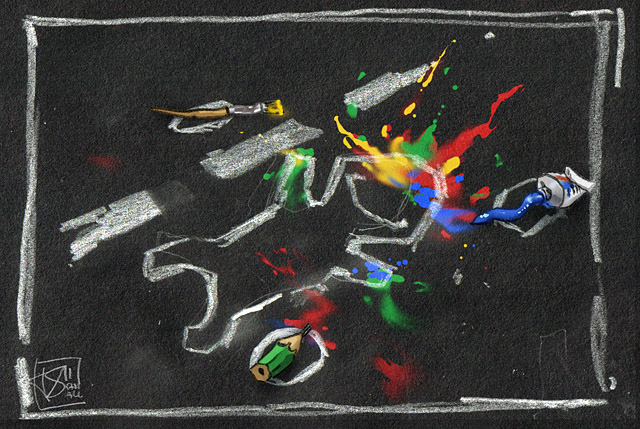 Now I can not say how much of an effect this has directly on your painting skills – I know of no specific studies. But seeing how central sensory input is for our neural structure, it must make a substantial difference in the long run. And it makes sense: Our development is adapted for a physical world. It relies on sensory input, because that is how we used to interacted with the world. We are not made for mouse and screen. Using computer-modeling-tools helped me get better at drawing perspectives, I’m sure. But using clay gives you a real feel of 3D space that you will not get on a computer. These things are not just additive, they will create synergies in your brain.

Not to come across wrong here: I’m not saying throw your PC’s away! After all, varying the tools you work with, is beneficial too. But consider not to limit your sensory input – remove the layer of abstraction from time to time. Which may give a fresh boost to your painting-neurons.