Take a quick look before I write more – this is a Roman painting. First in the original as you can see it on Pompeii’s walls, then as a photoshopped version, in which I combined several photos, effects to bring out the true color and some touch-ups (without adding things that weren’t there).
See it here like nowhere else! ;) 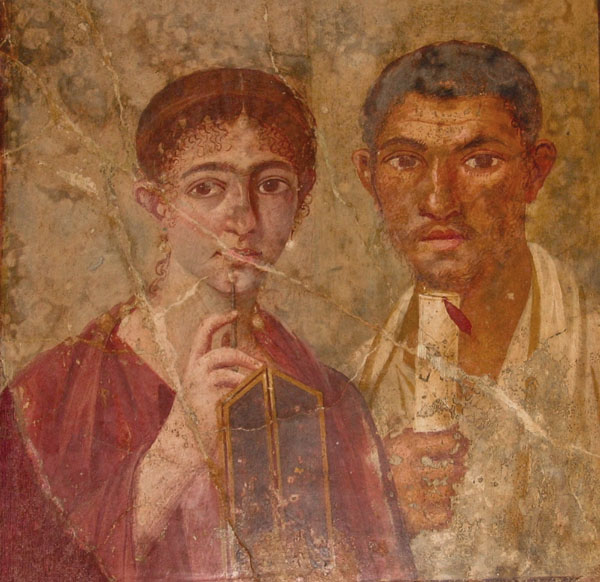 It really touches me I do admit – those people look like they could be ones neighbors. Most probably this is a portrait of a newly wed couple. Both seem to be writers as they hold papers and pencils.
Ironically the catastrophe of 79 AD that not much later delivered them most likely to a horrible death, conserved the picture. Which gives us the gift to see of one of only a handful remaining Roman paintings.

I discovered this in the BBC documentary “Sister Wendy’s: A Story Of Painting“. In which a kinda odd nun goes around in the world and talks about art. She knows a lot and has a unique view on things. Great stuff.
What struck me is the high technical quality. How few things did we learn until then? The colors of the skin are close to perfect – with a transition from yellow, to red, to violet to gray. And maybe even because it’s not photographically perfect, the figures feel full of life. The eyes are nearly magical.

It took Europe more than 1000 years to get back to that standard. And very probably this picture is just from an average artist – as if you would pick now a random painting from our time, to pass to the future. Imagine what pieces of the masters of that time are lost, never to be seen again.